Skip to content
The Abbott Story, written by Ingrid Abbott 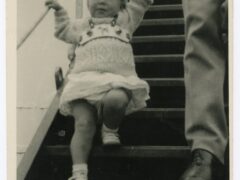 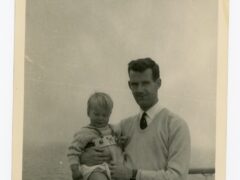 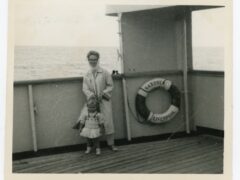 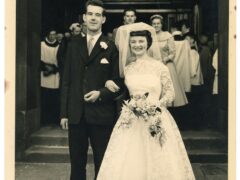 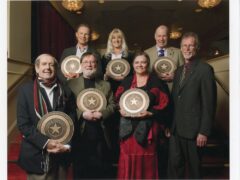 Work for my father

Listen to the Maeve Binchy track

Listen to the Paddy Maloney track

It was never a matter of if, it was always a matter of when. My parents Ruth Kilbey, and David Abbott dreamed of immigrating when their romance was new. They met at a dance, only because my emboldened father stepped on my mothers toe to get her attention

My mother grew up in Sandymount, Dublin, the daughter of a successful stone mason, Sidney Kilbey, (Kilbey and Sons), and Mabel Tutty. My Father was raised in the working class Dublin neighbourhood of Drimnagh, the son of a printer, William Abbott, and May Andrews.

In 1957 my father was studying to be a teacher at Trinity College and my mother worked at the Bank of Ireland, 2 College Green. Father took a job at Sligo Grammar School but that didn’t stop their romance and they were married in St. Anne’s church June 1958. My father immediately accepted a teaching job with Loughton Grammar School in Essex, England, which was convenient because they were able to hide my mothers pregnancy. I was born 5 months later, their only child. They scoured the London Times for teaching opportunities. Offers followed from Venezuela, St. John Newfoundland and St. Georges boys school in Vancouver. After viewing photos of Vancouver my father accepted the position of english teacher and rugby coach.

We sailed out of Southhampton and arrived in Vancouver August 1960. At 23 my parents became master and mistress of St. George’s Sweeney House in the neighbourhood of Dunbar, where the boys slept downstairs and we lived upstairs. My parents embraced the school community and the beauty of the west coast, but my fathers ambitions would see him plan for a college in Ibiza Spain with a fellow teacher named David Price.

The summer of 1964 we sailed on the SS Constitution ocean liner with 25 Vancouver college students and support staff. Arriving in Ibiza was a shock as unbeknownst to my father David Price had used the colleges start up money to shack up in a villa with a male lover. This destroyed my fathers dream and the age of 27 my father with no resources he had to admit the college was a failure. There was never any debate we would return to Vancouver.

Fatefully my father sat next to broadcaster Pat Burns on the plane who upon hearing the sad tale offered him a job selling advertising at radio station CJOR. Eventually he would join Scottish broadcaster Jack Webster on the air and broadcasting history was made.

My father enjoyed a long successful career as a broadcaster with CJOR, CKNW, CBC, CJVI, CKVU television and AM1040. He was a regular columnist with the Celtic Connection.

He travelled the world as a journalist and interviewed politicians and celebrities from Peter Ustinov to Ferdinand Marcos. In 2011 he was inducted into the BC Entertainment Hall of Fame, the same year he sadly passed away. He was a popular engaged member of the Irish community in Vancouver and was fiercely proud of his Irish heritage, and his Canadian
citizenship.

My Mother lives happily in Tsawwassen with her husband John Leary after a successful career in interior design. She is fond of saying, “Immigrating to Canada was the best decision we ever made”.